I meant only to observe and ask the director a few questions that first day. But upon my arrival, the first thing the director asked was, “Can you teach art?”It was a hot, dry morning in July when I arrived at the kids’ camp in Amman, Jordan. I was there to meet the director and to observe a day of camp activities, hoping to learn more about refugee experiences in Amman. The director and a handful of volunteers helped run the kids’ camp every summer, focusing primarily on Syrian and Iraqi refugee children who had settled in Amman. They sang songs, played games, read stories, practiced English, and did art. The following week most of them would attend a soccer camp run by the same people.

I could, and I did. Their art teacher was out sick, so for the next couple days I taught crafts to nearly forty Arabic-speaking children. My Arabic was not perfect, but it was intelligible, and with the help of a few other bilingual volunteers and children we managed well. It was a fun, fulfilling experience – although altogether unexpected – one of many during several weeks of learning about refugee experiences and children’s literature in Jordan last summer. Not only did my Arabic improve through the experience, but also I gained valuable connections, experiences and memories, not to mentioned greater adaptability and resilience through many unexpected adventures. Last summer’s trip to Jordan made me want to study Arabic more than ever and – hopefully – to return to that part of the world one day.

I would not have travelled to Jordan, nor might I now be an Arab Studies major at Davidson College, without the QFI’s assistance through the Rising Academic Award. While a student at Davidson, I have explored Arabic children’s literature and refugee experiences through writing and illustrating a children’s book in Arabic, translating Syrian folktales for Davidson’s Translation Studies Journal, and developing The Epilogues Project (https://epilogues.anneliseclaire.com), a website featuring refugee resettlement narratives in Charlotte, North Carolina. I have also worked as an Arabic tutor and have served as co-president of the Middle East and North African Student Association, a cultural club on campus.

Learning a language is not easy. These various projects that I have worked on have not been easy. But these projects and experiences have provided me with a degree of adaptability and resilience that I take with me wherever I go, whether it’s at home in Washington, DC, at college in Davidson, North Carolina or in an art classroom in Amman, Jordan. My adventures as an Arabic student have gifted me with memories that will last a lifetime. I am grateful for the QFI for their financial support of my Arabic education – and all of the life lessons that that has entailed – both in the classroom and abroad. 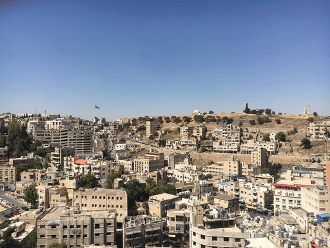